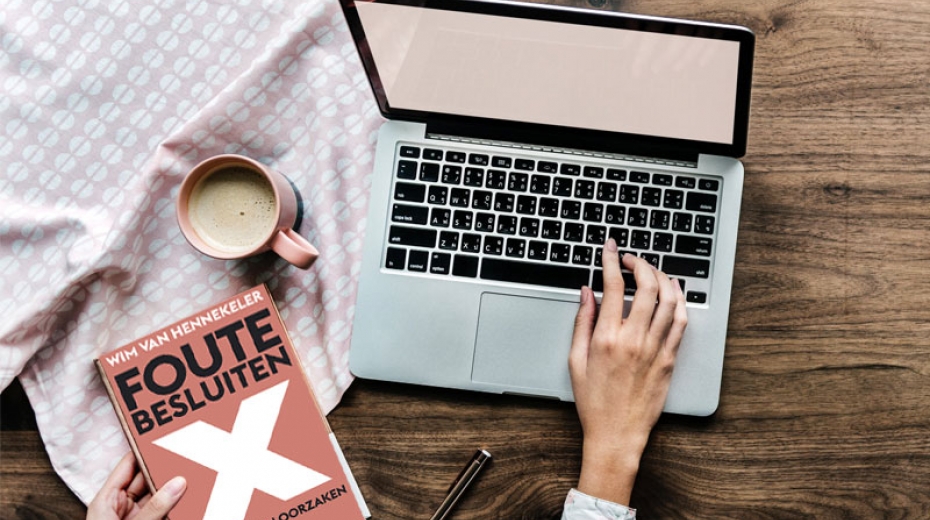 Wim van Hennekeler does not believe that organizations are completely malleable, capable of being formed into any shape we choose. The same applies to society itself. “It strikes me as rather arrogant for leaders to claim that they can determine the exact course of an organization. If we want to turn left tomorrow, we shall turn left, they say. This completely overlooks developments both within and beyond the organization. Those developments have far greater influence than many leaders think. Decision-making processes must therefore have mechanisms that allow for adaptability. Even then, things can still go horribly wrong.”

Van Hennekeler, head of Cognizant Consulting in the Benelux, is fascinated by failures and the patterns that underlie them. This is no doubt due to his academic background in political science.

“If you look at what history itself decides, you have to question the role of leaders,” he says bluntly. “In politics, the key question is ‘who governs?’ and the answer is not always ‘the government’. That’s what interests me. I have always been fascinated by the interaction of authority, power and decision-making, not only in politics but in business too. The way in which you arrive at decisions is becoming increasingly important in our rapid changing world. You must be able to recognize the patterns that underpin the decision-making processes. That is the best way to avoid making bad decisions.”

When researching his book, Van Hennekeler studied a large number of failures, analysing the mistakes that were made. He identifies six main causes of poor decision-making: too much authority vested in a single party, incomplete information, group pressure, insufficient awareness of complexity, macho behaviour and the ‘bonus bias’. “I think these are the main reasons but I’m not claiming that the list is exhaustive. In any event, I am only concerned with patterns rather than the precise number of causes. I want to challenge my readers to evaluate my ideas. They must decide whether I’m right. My book is not a ‘how to’ guide and I am not proposing a ready-made management model, unlike ninety per cent of the other books on the subject. It is precisely when you’re talking about business failures, about how large organizations arrive at the wrong decisions, that you realize that a little humility will not go amiss. Of course, it’s good to be ambitious. However, it is also wise to realize that there are many interconnected factors at work. Things often fail to turn out the way we had expected.”

One familiar example on which Van Hennekeler draws is Nokia, seen for many years as an extremely successful company which constantly managed to reinvent itself. Until the emergence of the smartphone, that is. Nokia missed the boat and within a few years was forced to sell its mobile phone division to Microsoft. “Exactly why Nokia took a wrong turn has been very astutely analysed by two researchers, Timo O. Vuori and Quy N. Huy. They not only looked at the process itself but also at the underlying dynamic and the emotions of the people involved. That Nokia failed to innovate quickly enough was entirely due to a decision-making culture in which senior management was extremely authoritarian and all subordinate levels were meekly compliant. The boss wanted everything done his way and nobody dared to contradict him. As a result, the company continued to focus on hardware rather than software.”

In short, the people at the top applied entirely the wrong style of management at a crucial moment in Nokia’s development. “The company had functioned well for a very long time. Management therefore thought it unnecessary to change the decision-making culture. Why should they? The answer is: because the world is changing very rapidly. In the past, managers could build upon earlier decisions in a sort of natural progression. Things were broadly stable, so this was a perfectly satisfactory way of doing things. My grandfather worked his way up to become the director of a factory. For him, every working day was exactly the same. Yes, there were major, often unpredictable events – geopolitical upheaval and wars – but people who were good at something continued to be good at it. If something worked, it was likely to carry on working for a long time to come. That is no longer the case. You now have to examine the mechanisms that influence your decisions with a very critical eye. This is the key message of my book. It can be far more difficult than you might imagine. In many cases, you may not realize that the mechanisms even exist.”

The causes of poor decision-making have one thing in common. The teams responsible generally consider each of the various factors in isolation, and then arrive at their own, entirely autonomous, decision. “Based on their own expertise, they believe that their decisions are sound. They may be right, but in many cases, there are underlying patterns of which the team members are not aware. They overlook important matters. Perhaps they allow themselves, albeit unconsciously, to be influenced by an authoritarian leader. Perhaps they simply don’t know that they have insufficient information, or they underestimate the complexity of the problem, as is often the case with major infrastructural projects. It is possible that the decision-makers have an ulterior motive. Or they may just want to ‘flex their muscles’ and push through the decision come what may, which can be termed ‘macho’ behaviour. The secret is to be aware of the underlying patterns that influence your decision-making culture. That is the key message of my book.”

Why do managers cling to these flawed processes? Is it due to a lack of self-awareness or a failure to face reality? “That is certainly part of it. We might be dealing with someone who rigidly adheres to a certain way of doing things because he has difficulty interacting with others. Or someone who moves from job to job and is not particularly good at any of them. If he understands why this is, he can start to remedy his shortcomings. But if he remains totally unaware of the underlying patterns, nothing will ever change. Precisely the same mechanism applies at the level of the organization itself. If the organization rigidly clings to what I term its ‘beliefs’ – the unwritten rules that shape the decision-making processes – absolutely nothing will change. However, if the organization – or team – is prepared to examine its beliefs and engage in self-reflection, it can avoid mishaps and mistakes. I have seen this at close hand when advising the management team of a large multinational. They realized that their market share was under threat from the emerging economies in Asia. They consciously asked themselves whether their past success formed a reliable basis from which to stave off the new competition. It was enlightening to see how the team members set about building self-awareness.”

Wim van Hennekeler is wary of ‘fashionable’ management concepts. He does not offer a ready-made model but confines himself to a checklist – albeit a comprehensive one – which helps organizations to examine their own decision-making culture. That is not to say that he rejects all management theories. ‘Continuous improvement’ has certainly proven its worth, he concedes. “Whether you call it Lean or Kaizen or whatever, it is always useful to pursue ongoing improvement and increased efficiency. That’s not so much a theory as a self-evident truth. But there is also the danger of falling into a rut. You become very good at things that are no longer the right things.”

Another ‘popular’ management idea that Van Hennekeler wholeheartedly endorses is that diversity within teams has a positive effect on the decision-making culture. “Diverse teams automatically view the same issue from many different perspectives. Of course, this does not make the decision-making process any quicker: it takes time to collate all the arguments and counter-arguments. And by ‘diversity’, I don’t just mean gender or ethnicity. It’s also a question of diverse attitudes and professional backgrounds, as in a multidisciplinary team. Diversity does offer great benefits but it is not a magic bullet. It will not always guarantee the best decisions because even diverse teams can fall into certain repetitive patterns, especially when they have worked together for some time.”

Despite all current knowledge, there have been several examples of projects that have experienced serious difficulties due to poor decision-making processes. IT projects seem particularly susceptible, as in the Social Insurance Bank’s attempts to implement a new integrated data system, or the Dutch government’s roll-out of a centralized population register (the Basisregistratie Personen; BRP). “These are fascinating case studies,” comments Van Hennekeler. “We see the same patterns in each: overblown ambition, underestimated complexity, overestimated feasibility, and over-dependence on expensive external suppliers. Failures such as this are not confined to the public sector: private companies have also had their fair share. In my book, I advise decision-makers to divide any project into smaller sub-projects or phases, with someone responsible for each. It must not only be possible to manage the overall process, but also to adapt the process ‘on the fly’ to avoid knock-on effects. The failed government IT projects were subject to an inquiry led by parliamentarian Ton Elias. He summed up the situation very succinctly, describing it as ‘another case of shared irresponsibility.’ Language can be very useful in this sort of discussion. And that is precisely my point. No matter how large the project, a degree of reserve is appropriate.”

With a background in political science and management consultancy, Wim van Hennekeler has developed a very close interest in decision-making processes. He has examined the underlying patterns and studied various decision-making cultures to arrive at recommendations of which he hopes will improve processes and prevent mistakes. Wim van Hennekeler is Vice President of Cognizant Technology Solutions. 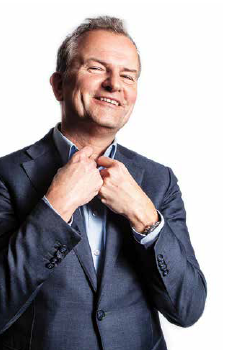 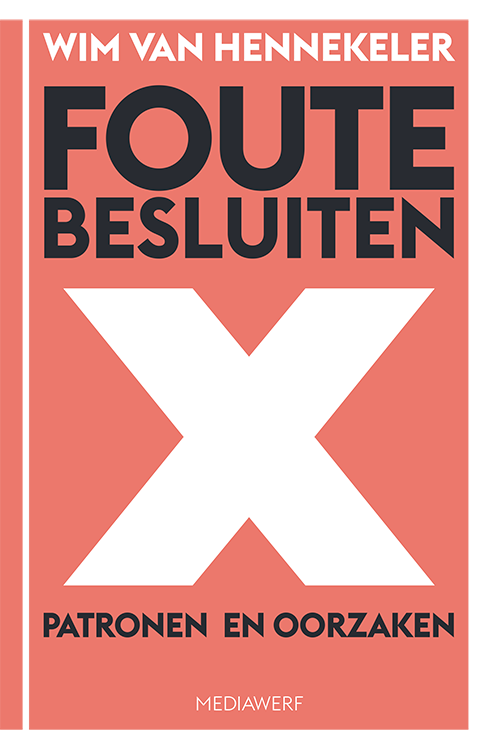 The impact of the digital economy on organizations

In a recent survey, four hundred senior managers in Europe and the United States were asked to state how they expect their companies to fare in the digital era. What aspects of the business will experience most problems? The answer was clear: any obstacles are caused not by technology, but by people and the organizational structure. Anyone who fails to address this situation will, the respondents suggest, be left behind. What does this type of research tell us? And what action should organizations take based on the results?

Can outsourcing and innovation go together?